So, as you probably guessed, I didn’t make it all the way to the end of the thirty days before giving up on the “Wholesome Eating” challenge I started in August. I did pretty well for a few weeks . . . and then, as I mentioned before, rather than improving on a cleaner diet, my psoriasis on my hands and feet continued to get worse.

Before I had my doctor appointments on September 3 and 4 (after having to push them back almost two months because of changing jobs and thus insurance), my feet were so bad that I could barely walk, even when all of the places where there were splits and cracks (i.e., the equivalent of deep lacerations) were bandaged and taped—and because of favoring one foot or the other (or both), it threw my knees, hips, and back out of alignment so that all of those were constantly painful as well. Plus there was a lot of swelling in my ankles and knees, making any movement even more painful. My hands (with the psoriasis now spread up to the tips of my fingers) were swollen, stiff, cracked, etc., to the point that I could barely grasp anything (fingers swollen/stiff/not working right) and when I did, it was painful because of all of the splits/lesions.

The best way I can describe it is this: Imagine wearing a pair of extremely stiff, extremely rough wool gloves that not only itch but feel like they’re rubbing your skin raw. Then imagine that there are tiny shards of broken glass embedded in the fingertips and palms creating random cuts all over. That’s what it felt like.

So aside from not being able to stand up or move around the kitchen to cook, I couldn’t even do any kind of prep work. And convenience foods are notorious for not being all that nutritious.

At the appointment with my dermatologist on September 4, I started on a new medication for my psoriasis—this time, he recommended I try Otezla, which is a daily pill rather than a weekly self-administered injection (yay!) and which isn’t an immunosuppressor (YAY!) like the Enbrel I’d been on for eight months with little improvement to show for having to be on heavy-duty antibiotics three times in the first six months of this year.

That was two weeks ago. Here’s a before-and-after photo of the improvement I’ve had in just two weeks. I don’t think I was actually supposed to improve this much this quickly. But I’m most definitely not complaining!!! (Now if I can just get my insurance company to agree to approve the prescription so that I can continue with the treatment beyond the one-month’s worth of sample product I have.)

So now that I can not only use my hands and stand (and walk and exercise!) again, it’s once again time to start getting my eating back in order. (Especially since, even after three successful weeks doing this before my regular doctor appointment, my A1C—long-term blood-sugar level—was still at 6.3, which is about 0.3 over the “diabetes” line. I have been able to successfully get it down under the line with diet and exercise before, so that’s my focus now.) 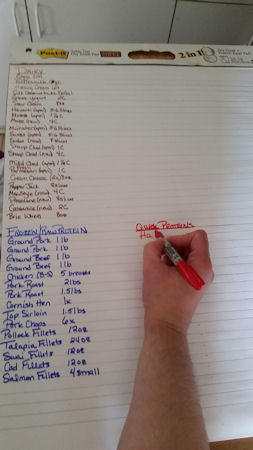 I’ll be starting a new 30-day round of My Wholesome 30 on Monday. As a reminder, this is my low-carb, dairy-inclusive version of Whole 30, aimed at feeling better, having more energy, and getting that blood-sugar level back down to the non-diabetic range (and getting my blood pressure down would be great, too.)

So this weekend is devoted to preparing and planning. And I’ve already started by starting an inventory of all of the MW30-appropriate foods I have in the house (after a big shop yesterday in which I bought lots of fresh veggies along with some fruits and proteins/quick proteins) to make planning easier.

I do have some recipes that I made last time that I never posted, so I hope to get those up soon.